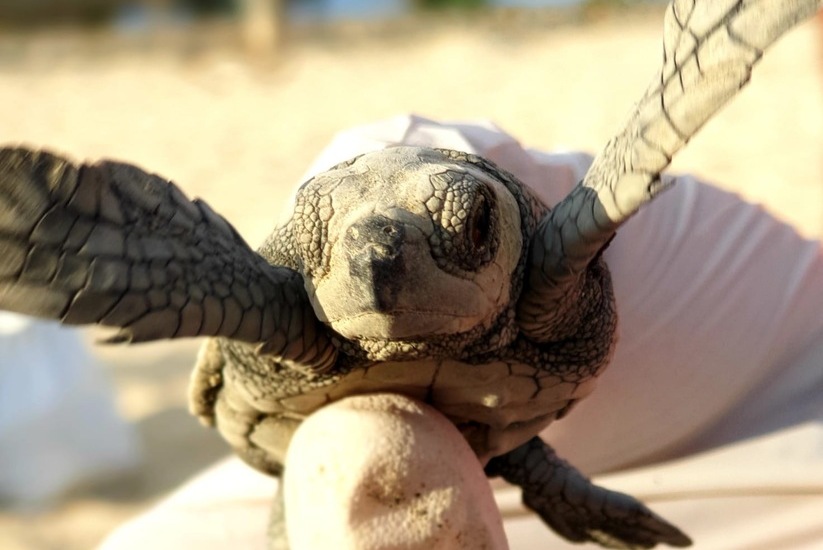 Currently AMA’s goals include missions: to save 45 sea lions from entrapment by fishing nets, to release 5,000 turtles into the sea, hatched from eggs that had been endangered, to complete the construction of Fundacion Illuminame, an educational centre on a landfill site, and to build a museum to showcase Baja’s marine life and marine conservation.

AMA FOUNDATION was created by its Founder and President Sonia Falcone, with the objective to improve, protect and save the ocean, as well as creating an ecological environment in Baja California.Registered in Mexico, with the mission of marine conservation in Baja, AMA will financially support marine conservation partners already in place and spread awareness as to the crucial work they do. Starting with the waters of the Sea of Cortez where many of the world’s whales migrate annually to reproduce, AMA aims to look after Baja.AMA operates with an ethos of transparency and respect for the oceans, recognising that they provide 99% of the planet’s living space, with an estimated 50-80% of all life on earth found beneath the ocean surface.The word ‘ama’ means ‘Lady in Charge’ and AMA Foundation seeks to represent the status of the ocean as an entity to be respected and cared for, so she in turn can continue to do her own magnificent job.The Sea of Cortez and the region around the Baja California Peninsula is not only a site of outstanding natural beauty but also a mecca for marine life. Jacques Cousteau, the famous marine explorer called it ‘the world’s aquarium’ when he often visited between the 1960’s and the 1980’s and still today some 900 species of fish, thousands of invertebrates and around 30 mammals reside here while many others frequent the place on a regular basis.

Mammals range from Blue, Grey and Humpback Whales to Sealions while fish include Marlin, Yellowfin Tuna, Manta Rays and Whale Sharks, the largest fish in the world, a gentle giant which is totally harmless to humans. There are also dolphins, eels and sea turtles.

Sadly today many of these species including Sealions and Whale Sharks are endangered due to decades of fishing and commercial development, causing issues like net entanglement, lesions and trappings from bad fishing practices, not to mention pollution caused by loose plastics and other non-biodegradable waste.Now more than ever, we need to rescue and protect the oceans and the marine life living within them.

AMA – Saving the Oceans strives to advance marine conservation & strengthen local communities in Baja California, Mexico. AMA supports marine conservation projects particularly around the Gulf of California (Sea of Cortez) in Baja California Sur. The place the French explorer, Jacques Cousteau called “the world’s aquarium" for its extraordinary marine life is still exceptional yet also increasingly in need of protection due to the region’s unprecedented challenges. Recently these have included rapid population growth and marine pollution such as plastic and fishing debris on beaches and in the water.

Exciting new marine conservation initiatives we are pursuing include developing a special nutrient-rich AMA Marine Life plasma water, benefiting from the minerals found in areas abundant with plankton such as the Sea of Cortez. AMA is also developing a special Marine Life Museum in San José del Cabo to showcase the marine conservation history of the region as well as innovative projects in partnership with leading marine biologists.

AMA believes Baja California’s marine life and community are interdependent; its work includes educating the youth and caring for the elderly and vulnerable. Since November 2019, AMA has raised thousands of dollars to fund environmental care and awareness activities in Baja California’s waters and communities, including COVID-19 relief efforts. In the past months AMA has worked closely with local hospitals and care homes in the community, donating protection and sanitisation materials to help front line workers throughout the pandemic. AMA also supports social projects in education, arts, ecology, and for women and children. All are led by locals, experienced in and passionate about their respective fields.

AMA’s objective is to improve, protect and
save the seas, as well as creating an ecological
environment in Baja California.

AMA operates with an ethos of transparency
and respect for the oceans, recognizing that
they provide 99% of the planet’s living space,
with an estimated 50-80% of all life on earth
found beneath the ocean surface.

AMA FOUNDATION was created by its President,
Sonia Falcone, in 2019.

Copyrights © 2019 All Rights Reserved. Made with love by Ovis.